Meet illustrator, street artist and muralist Symone Salib, who just adores Philadelphia. One of her portraits—of Frank Ocean to be specific—is now hanging in the gallery wall of our new Suburban Square store. We sat down with her and learned some interesting things. Or how she started painting famous portraits but now focuses on members of the community. Like how she thinks basic human rights aren't up for debate. And the time she got a helpful art tip from a delivery man. Read on for more.

What medium were you first drawn to in art?

When I first started making art, honestly, anything that was accessible. For me, it was really shitty acrylic paint. Up until recently when I’ve started to have larger budgets for projects where I’ll invest in more quality stuff, but I am definitely someone who thinks: “it’s not the quality of your tools, but how you can wield it in your craft.”

When did you start considering yourself an artist?

I would say I always considered myself someone who is an artist. Since I was very little. I have a good memory of being five years old, and responding to the question “what do you want to be when you grow up?” by drawing myself in a stupid block smock with a black beret—not like I’d wear any of that!

But I would say I really started to take my career as an artist seriously in December of 2017. From there, it has been a wild amount of momentum that kept me creating, I want to say, almost everyday.

What are the things that fell into place in December 2017?

I did a series of portraits. I was going through seasonal depression and some life stuff. Instead of staring blankly at the wall like I wanted to do, I thought, why don’t I start creating? Because it’s meditative and does not require the most brain activity, but has me moving my hands. I made a series of portraits in a month, and they were big, like three feet by two feet.

They were of black and brown artists and musicians that I was inspired by. I didn’t know I had this in me. I had never painted portraits before and I was always very scared of them. So when they came out kind of dope, I was like, “maybe I should keep going.”

Those portraits range from Issa Rae to Yayoi Kusuma. How do you pick the people you feature?

At first, it was people that I really vibed with. Either I liked their music, or someone I look at with inspiration because they paved the way for someone like myself.

But now, I love to include people in this place that I live, in Philadelphia. I don’t think I ever felt at home in my life until I moved here. Mostly because famous people already have a platform—they don’t need my help!

Highlighting people who are doing work for the community—that’s important to me. If I can highlight them or give them a platform or share their story, or bring something to light that needs to be told, I’m going to do it.

What role does social justice play in your art?

I did not start making art with the intention of being a political artist or an art activist. I have no problem making art about those things, and they often surface in my work. But we’re living at a time when basic human rights have become taboo. Which to me is really unfair. So honestly, in my work, I just think about things that are basic human rights issues. Things that we should all have access to.

So people will be like, “Your work is so political!”

And I’ll be like, “Is it political that everybody should have somewhere to live?” 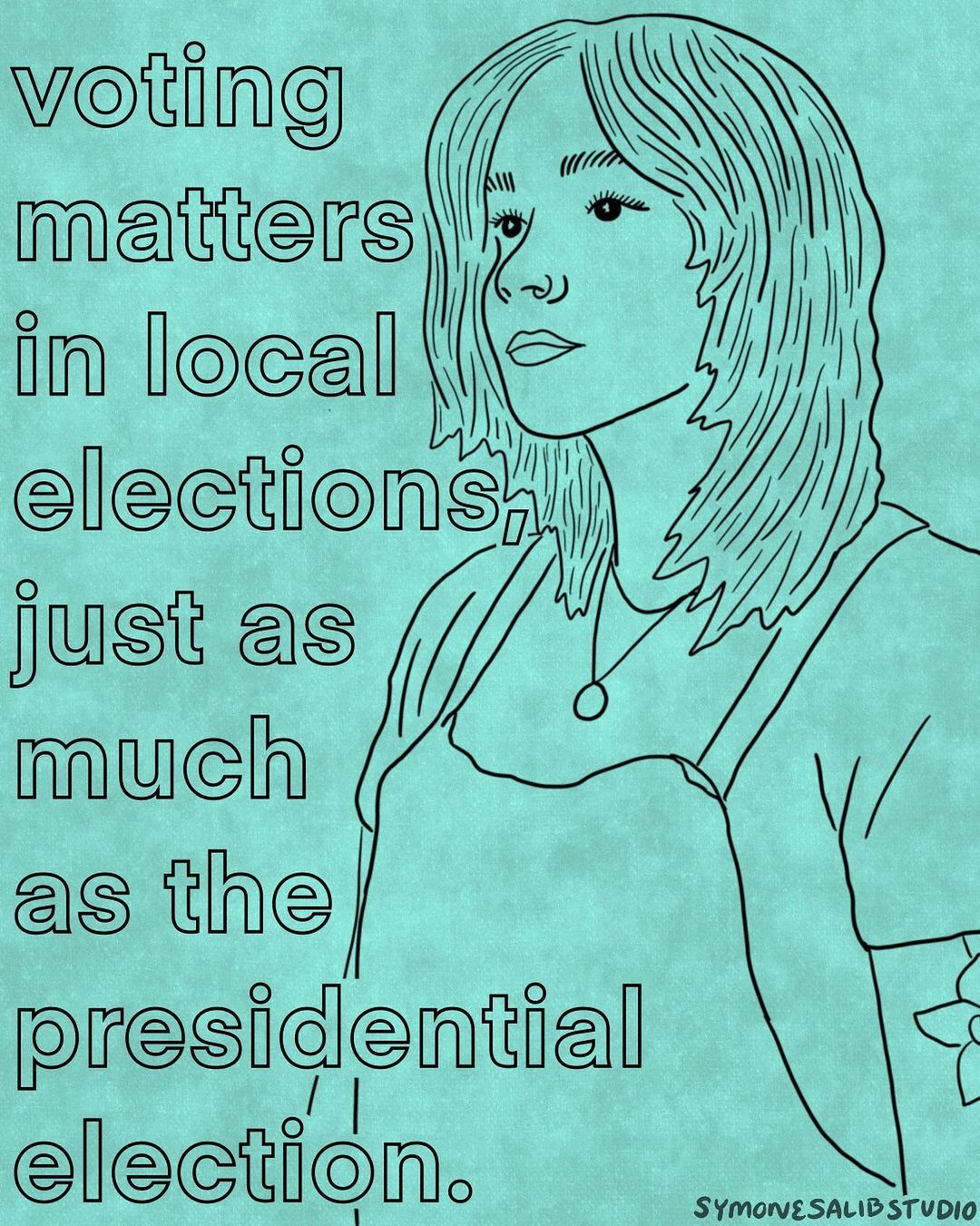 Why did you want to portray Frank Ocean?

I love his music, he’s never gonna give me anything more, I know that. I have never seen him in concert, though I have wanted to badly and almost have.

So honestly, it was just me being a ham, and wanting to show gratitude to how much I love this guy. His music has been a wonderful soundtrack to a lot of really transformative years of my life.

I still have the original painting. It hangs in my living room. I love it. 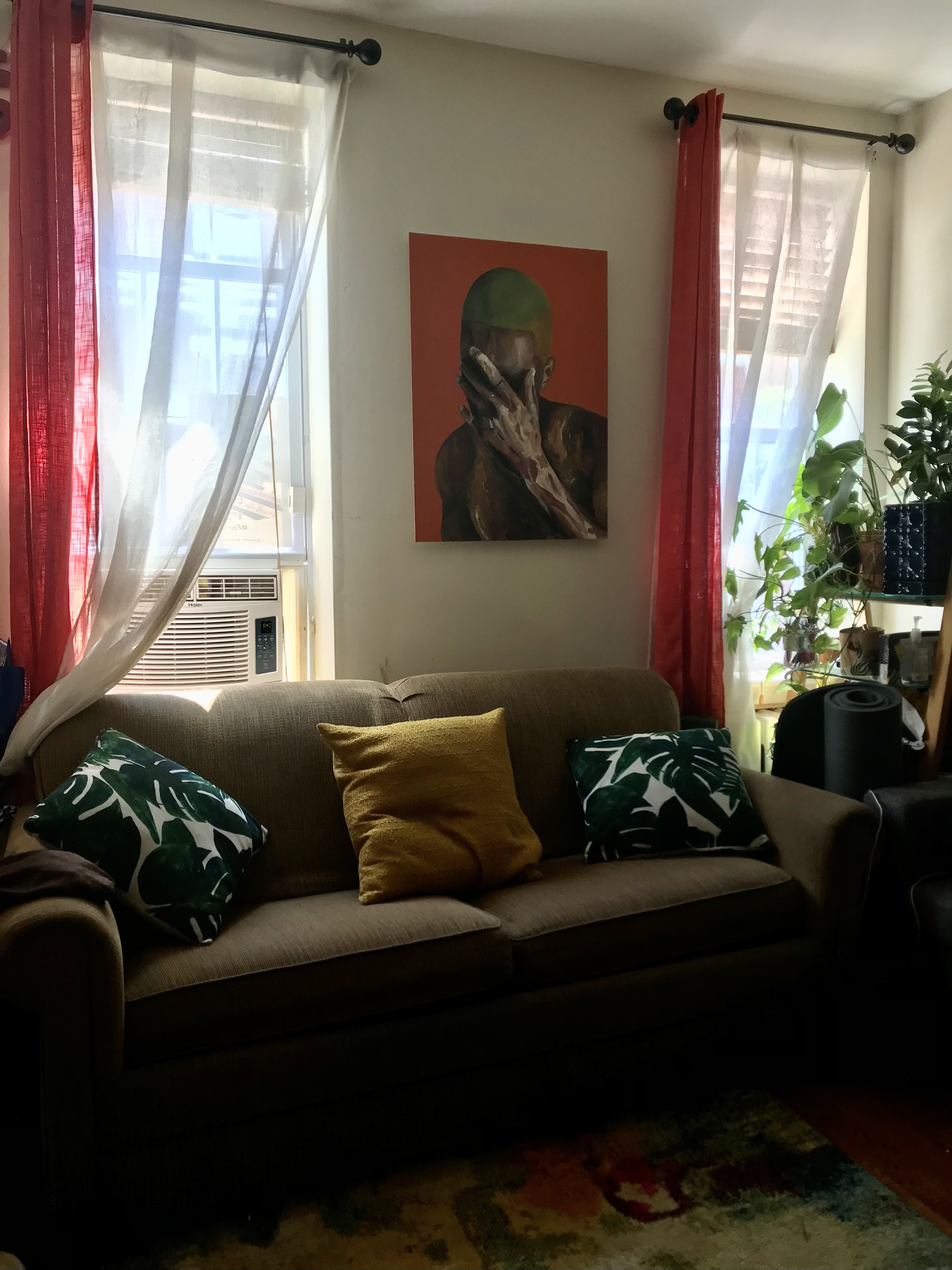 It’s a bit of an amalgamation between his albums Blonde and channel ORANGE, is that right?

This is actually a great story. The day of my first art show [that featured the portraits], I was all ready except I hadn’t painted the Frank Ocean background. And I didn’t know what to do.

All of the sudden I get a package. Someone knocks on the door, and the delivery man drops something off and sees the painting and said it was cool. I told him I was stumped and didn’t know what to do with the background.

He said, “It only makes sense that it would be orange, for channel ORANGE.”

Then he went on his merry way!

How do you feel knowing this piece is part of a gallery wall that has such a focus on music?

As somebody who is an intense concert-goer, I really miss it, with the pandemic. It’s obviously not the biggest loss, but I genuinely miss it. There’s a real human connection, where everybody goes to a shared place where you immediately have something in common. So I feel blessed to be put on the wall.

What does Philadelphia mean to you as a creative home?

My love for Philly runs deep. It’s taught me so much of who I am and has given me the space to bloom. And the art scene is very accepting. There’s not much of a competitive energy that exists which I find healthy.

I feel so fortunate that I’ve chosen this city as a home for myself. And I hope to live here for many years to come.

How do you hope people feel when they see it on the wall?

Although the Frank Ocean portrait is a style I have grown away from, I think it is a beautiful memorial of my start in finding my craft. I feel really proud of it.

It makes me feel some type of way, so I hope it makes a little moment where someone is like, “Ohhhh, I love this too!”