George F. Baker, III is a Nebraska-born, Detroit-grown and Atlanta-raised creator. Using his instruments of design, illustration and production, he employs a playful, childlike spirit to engage the inner-child we all have. His client work includes brands like Dick’s Sporting Goods, Cartoon Network and the NFL. Currently, he is the Creative Director of Foster, a studio-collective striving to make people unafraid to play. He is featured in this iteration of the Black Artists Print Shop. 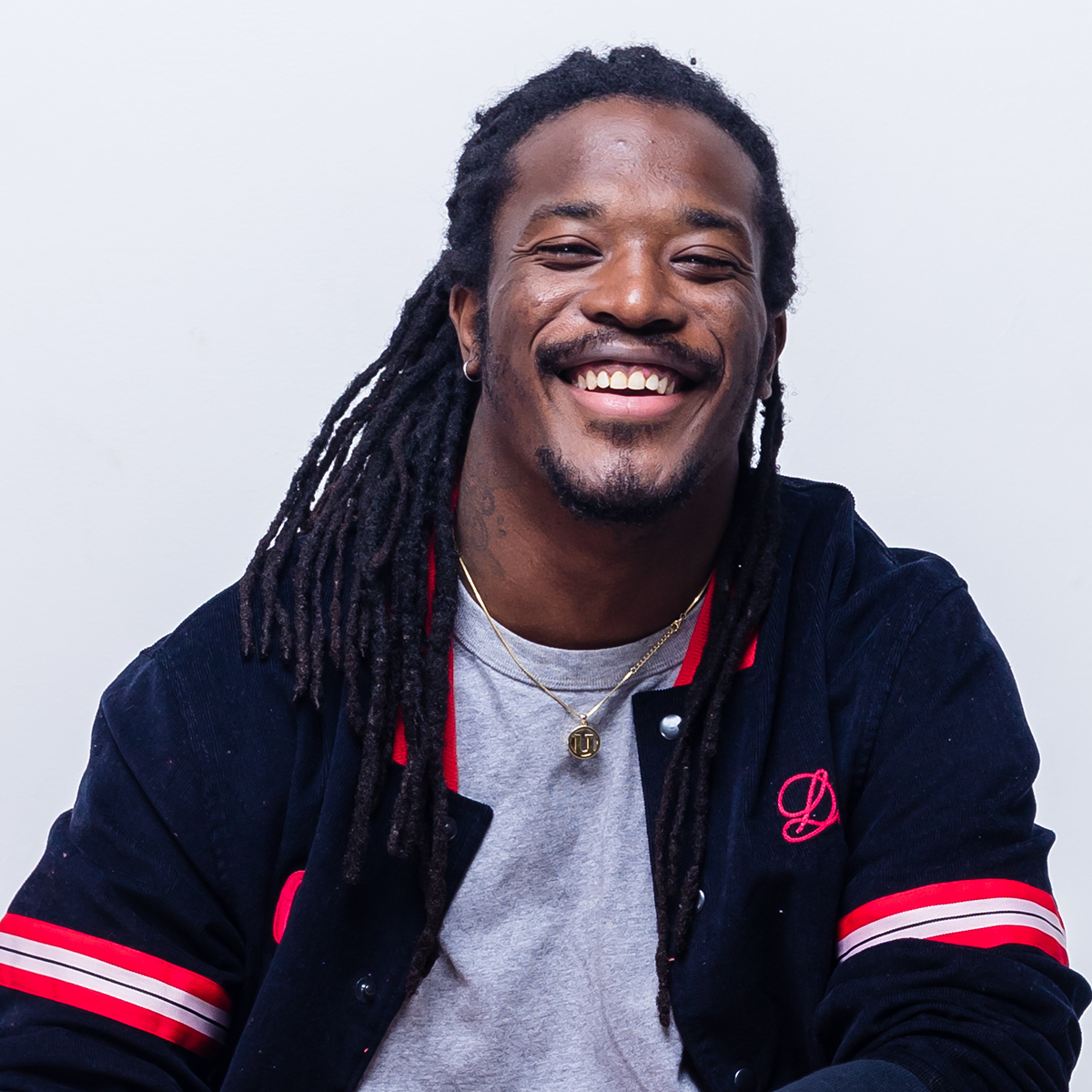 Your work aims to bring out the inner-child in its viewers. How does "play" show up in your work or process?

Play pretty much shows up essentially as soon as I start and as soon as I reveal it to the world. I can tell you right now I have nothing but Legos [the same box he’s had since he was nine], my old Nintendo games [Supersmash Brothers]—a variety of different materials that I like to use—because I want to make sure I give myself enough latitude to actually play with whatever I am doing. I want to bring the child-like essence out of me, but also in whoever is the viewer for the project. And that’s why I say the second part of play always ends up in the hands of the viewer because as soon as they get it, I want them to interact in a way that is playful for them. Maybe it causes some type of spark to look at their situation and see how they can use play in their day.

Though your work is playful, it is unafraid to take bold stances on social issues. How did you find that voice?

The way that I really found that voice, honestly, it came from my parents in two very distinct ways. My mom [even when George was a kid] told me that if I interact with an adult or an idea that challenges me—it’s not a reason to be afraid. It’s something that you should actually want to engage in. Even if it’s something that goes against what your particular beliefs are at that point. It still is an opportunity to connect with that person or connect even deeper with your own sense. For me, I’ve never been afraid to, at the very least, talk about social issues in any type of way.

And then with my dad: he’s always taught me that if there’s something you believe in, fight for it. No matter the consequences. Because at the end of the day, the glory will come out in the wash.

Of course, [speaking out] is scary because you don’t know who you may offend, or who may not want to work with you, or they may mark you as a certain type of person. For me, I am willing to take that on.

Your color palettes are so vivid and joyful. Do you choose the colors based on any particular meaning to you? What goes into their selection?

This is always a fun question, because everybody kind of assumes that it’s a very deep, intentional color palette. Honestly, I just go with the flow on the colors. I love bright color palettes, I love playing around with colors that may seem very difficult to use for some people, but I love taking those color risks. I know how to play around with colors to make it right for whatever I am doing.

For most of my projects, it’s mostly just a feeling. You should see some of my files… There are actually about a good 70 color palettes that go into the design graveyard!

Your work has a distinct look and feel—from the colors to the text to the facial expressions of your subjects. What was it like developing that style and what influences did you draw from?

It’s been an interesting journey in developing this style, mainly because I have been drawing in this same type of way pretty much since I was 13. But, what’s ending up happening over the years is that my skills have developed, but more importantly my confidence has developed.

As a kid, I was told by a teacher that I could not be an artist because my stuff did not look realistic. The very next day, I went to the library, I found a Keith Haring book and I shoved it right in her face and said, “Hey, what you’re saying is not correct.”

I think what over the years has helped my style become what it is just me being able to find the confidence within my own self to look at my work and find beauty.

As far as influences go, that’s a very long list. But off the top of my head: Dexter’s Laboratory, Ed, Edd n Eddy, I’m a huge streetwear and sneaker fan, anything and everything in Tokyo, interior design, the stage designer Es Devlin. I pretty much just like anything that people make.

From Adult Swim to Dick’s Sporting Goods, you’ve worked with some cool brands. What do you think makes for a good brand collaboration?

It’s really simple: honesty on both sides. Honesty about what the brand is trying to do and accomplish, and honesty in being willing to let the artist speak for themselves and the brand. Which tasks a lot of trust on both sides. I understand why some brands have thick creative briefs even before talking to the artist, but that, in a way, tells the artist, “I don’t too much trust you.”

I feel like honesty and trust go so far—to see an artist for what he or she is and what he and she can be and trust that they’ll be able to communicate in a way that speaks for you and also for the artist.

Tell us about your studio collective “Foster.”

Foster was the brainchild of me and a good friend of mine. Essentially, we wanted to create different types of situations that will help people bring that child-like nature out and just play. We worked on a couple of events to do just that. One of the events was called “Low Fat.” Which was a cereal social. So we set up a cereal bar, invited a whole bunch of people out, did fun combinations of our favorite cereals (of course we had the caviar of cereals there: Cinnamon Toast Crunch). And really just sat around and met people on a Saturday morning.

At the end of the day, we wanted Foster to be that space where people engaged in communicating with each other, but also engaged in who they are on the inside. A space where the little child inside of them could come out for a little bit.

How did you find Atlanta as a creative home? What does it mean to you now?

Anytime that I get to talking about Atlanta I can wax poetic forever just because I have fallen so deeply in love with it, not only as a city but as a concept. I found Atlanta originally through my parents. My Dad ended up getting a job at Atlanta Medical Center and so we all ended up moving here in 2003. And from that point, I can honestly say that it’s become my home. Just to say home doesn’t do the place justice. It’s a place that I’ve found nothing but inspiration and growth and beautiful challenges throughout. I found a mission here. And I can honestly say that that mission comes from what the city really truly is: a city of makers and creators. Some cities export steel, but for Atlanta, our main export is culture. It’s a place that’s always making a way.