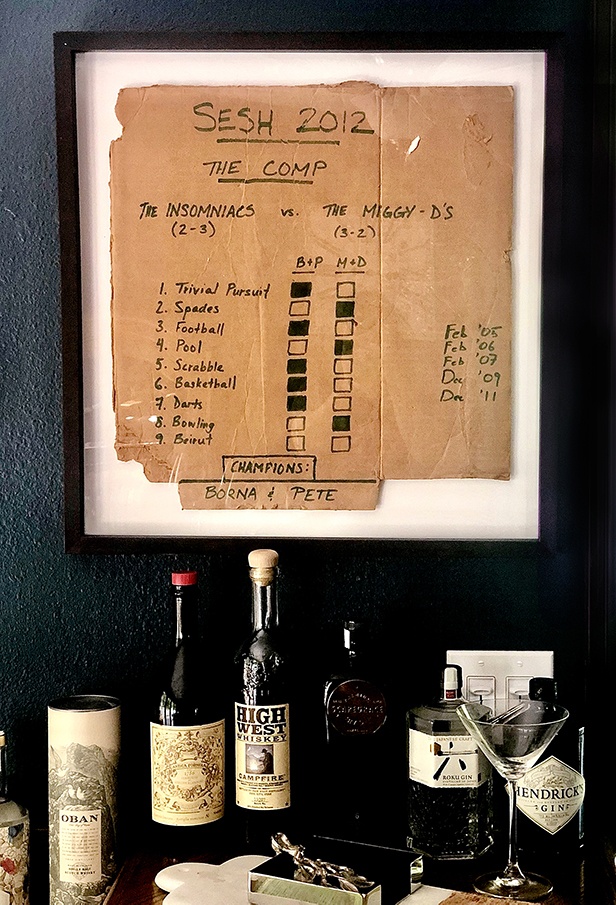 “My mom found this piece of trash but thought it was so important that she kept it for eight years,” says Douglas.

In their sophomore year of college, Douglas and his friends went to his parents’ house in New Jersey for their break after finals. “We were going to play games, sleep in the basement and have a nice relaxing bonding time,” he says, “We decided to do a competition.”

The Comp was born. They all came back for five more years, Douglas’ parents picking them up from college for their break after everyone had already seen their own families and finals were completed. It grew from five events to nine, brainy ones—Scrabble and Trivial Pursuit—to athletic ones like basketball and bowling. They split into two teams: the Insomniacs and the Miggy-D's.

The last time they gathered for The Comp in 2012, they kept score on a piece of cardboard. “We chose someone with the best handwriting to keep score. The poorly done writing on the side is by my other buddy. I’ve always both hated and loved that it was there. It shows that we did it for six years.”

When Douglas went home for Christmas last year, his mom had the scorecard up on the counter (She also has fond memories of the crew being there.) Douglas “surprised” his wife by having it framed and hanging it above the bar in their home. His friends were pretty happy about it, too.

“There are so many things in a moment that you remember, but you rarely have physical things that help them live on forever,” Douglas says, “because my parents decided not to throw it out, I’ll actually have this memory and be able to show it.”