The First Pride at the Pentagon 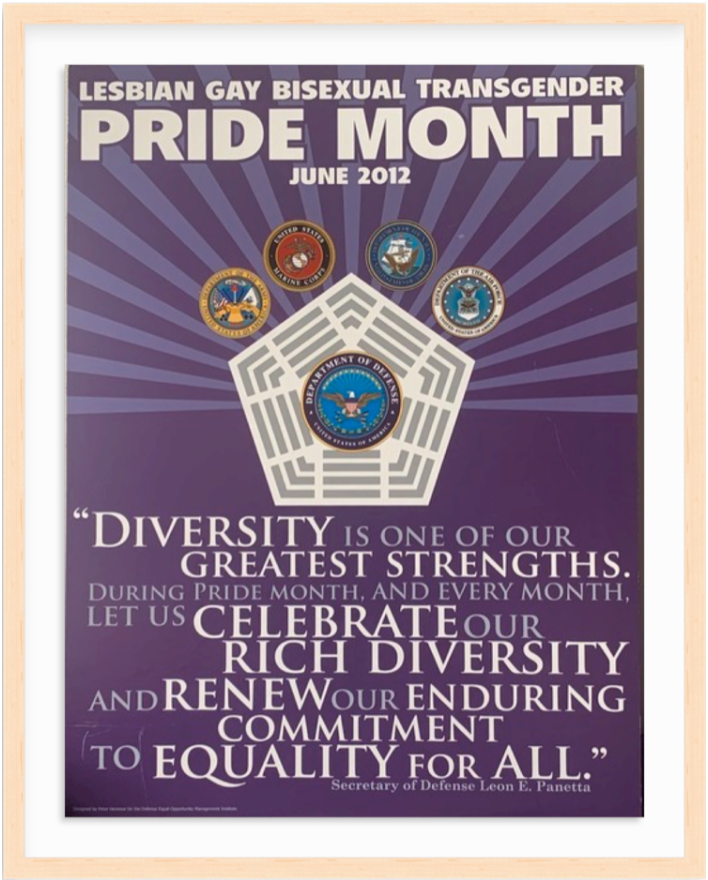 Alex Wagner arrived at the Pentagon in 2009, a civilian appointed by the Obama administration at a time when the Don’t Ask, Don’t Tell (DADT) policy concerning gays in the military was still in effect. As a civilian, you could be out, but it was not something that was discussed. By 2012, DADT had been repealed, and although it was an accepted policy change (the Marine Corps had initially fervently opposed the repeal, but by the time it happened they were recruiting at LGBT events), the culture of the Pentagon didn’t exactly encourage decking the halls with glitter and rainbow flags yet.

Other government agencies recognized LGBT Pride. In fact, most had committees dedicated to it, but the Department of Defense was not one of them. Alex and his fellow civilian appointee, Tarak, thought it was about time for Pride at the Pentagon.

“Too early. Too controversial.”

In a central area of the Pentagon, the Army Equal Opportunity and Diversity office would hang huge posters honoring various groups—Black History Month, Hispanic Heritage Month, Women’s History Month, etc. Alex emailed the person in charge of it in 2011 (still post-DADT repeal) about Pride month. They told him it was “too early.” He was determined. “I understood there was a sensitivity but we were not going to let it go the next year. I was going to ask for more.”

In 2012, they decided to go through the official channels to get a Pride event approved, but were met with resistance. “I don’t think Tarak and I got to where we were by taking no for an answer. We kept pushing and scheming, enlisting allies, pulling in friends who worked at the White House and who worked in the secretary’s office,” he says. They made headway. One by one, they got buy-in from the powers that be. They could go ahead with the event.

“We wanted to do the event in the way that every other event commemorates something that has happened in the past. Do it the Pentagon way with a chaplain and a color guard and a panel,” Alex says. They weren’t expecting nor did they want a Pride parade. They organized a panel of out LGBT people from every branch—no small feat especially in the early days of DADT repeal. Some clandestine efforts went into getting certain speakers there as the Department of Defense allowed it to happen, but wasn’t about to pay for travel.

“We had no idea who would show up, if anyone would show up, or if there would be protests. Typically these things were advertised weeks in advance and we only got to put up the posters a day or two before it happened.” The posters themselves did not have a Pride rainbow (“too controversial” at the time), but rather a purple background which had dual meanings—significance to the LGBT community worn on Spirit Day as well as a color of unity between arms of the military.

The people showed up. The media showed up. “I couldn’t even walk through the doors because there were so many people lined up outside of the auditorium trying to get in. It was broadcast on the Pentagon network which has the added benefit of being shown on military TVs all over the world. That was a big deal,” Alex remembers. It was such a big deal because it meant that they had visibility on military bases giving soldiers permission to hold their own Pride celebrations. A group in Afghanistan even had one earlier the same day, knowing the Pentagon event was happening.

The event went off without a hitch. But Alex and Tarak wanted to make sure the first Pride at the Pentagon wasn’t the last. They created DOD Pride, an employee resource group that would continue to have these events every year after. Last year they had one in the middle of the courtyard for everyone to see. The rainbow has finally made it onto the posters, too.

“I do think that changing of the culture at the Pentagon is due in some small part to the fact that we can have an event that says it’s ok to be gay.”