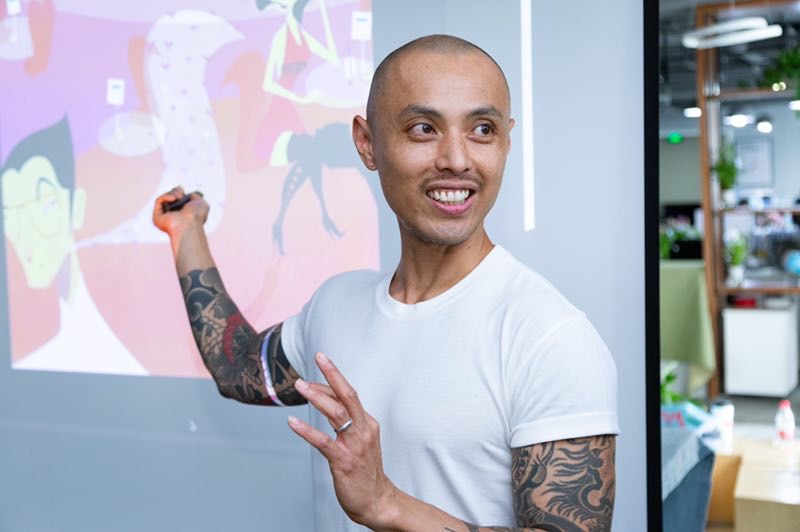 Marcos Chin is a renowned illustrator and instructor at the School of Visual Arts in New York City. You’ve probably seen his colorful and exuberant illustrations on magazine covers, in Starbucks or even on the MTA. This month for Pride, you can see one of his beautiful pieces in our Pride Wall and in person on the windows of our Williamsburg, Brooklyn store. We thought you should get to know him.

Can you tell us about your family and early years growing up?

Originally my family is from southern China. My grandparents moved from China to Africa in the late 1920s because of the war. We lived there until about the mid-1970s. Mozambique was colonized by Portugal and there was a revolution and a mass exodus. We were lucky enough to have left.

Like a lot of people who have left any kind of war, what we had, we no longer had. It was taken away or we couldn’t bring it with us. We moved to Lisbon, Portugal and from there we moved to Toronto, Canada in the late 70s—again, luckily because we were sponsored by my aunt and uncle.

My memory really goes back to Toronto. I don’t have family who work in art or design. They’re a working class family. My dad worked in a factory as a janitor and my mom worked in an office doing data entry. As a kid I was just doing ordinary things. When I was younger, I never thought that art and design were things I could pursue because we just didn’t have a lot. I assumed it was for those who had money or privilege. Somehow through different factors and help I am able to do what I do today.

Do you have a memory of a specific moment when you were drawn to art and illustration?

I’ve always loved drawing, like a lot of artists or designers who have loved their craft since they were very young. I thought that I was going to pursue economics or business because my parents saw [art] as a hobby and I was raised in a space where it just wasn’t practical, like a lot of immigrants. There’s still a “starving artist” mentality so you need a backup plan. You need a job. I really internalized that and possibly pursued another path to make money.  I thought studying business would be a good option. Unfortunately it wasn’t and I was miserable.

I decided to take a leap of faith when I applied to an art college called OCAD in Toronto behind my parents’ back. That’s when the course correction happened. Thankfully the Canadian education system is very different from the U.S. It’s much more subsidized by the government. I’d been working most of my life since I was 10 so I had saved up. With that money, student loans and scholarships I was able to pay my way through school. That’s really when I decided it was something I could do.

Energetically I was really hooked in the sense of making art, but at the end of college I saw nothing else I could do. I forced myself to pursue this with every bit of energy I had.

How did you develop your current intricate, colorful style?

I’ve always loved comics, anime, manga and cartoons growing up. Going through art school, I became a technician because of the course I chose. I was taught how to formally paint and draw. That took me away from those initial inspirations I had growing up. After learning different ways of art, I came back to color and character-driven narratives through my work. That’s always been at the center of the kinds of illustrations and art I like to look at. I like abstract, non-figurative work, too, but this for me felt really natural. There was a point when I had a portfolio that was all painted using traditional materials and it was really a mish-mash of my instructors’ styles. I felt it was difficult to continue making work like that because it didn’t reflect who I was. It didn’t reflect the things I liked.

You create a lot of commissioned work, but I’m wondering how you bring personal elements into your pieces.

It’s hard because I work on so many commissions and it isn’t always appropriate to bring parts of myself into each of the pieces, but I try my best. The portfolio on my website represents a very small fraction of the work that I’ve made. You’re really seeing the tip of the iceberg. The reason why I show that type of work is because I want to get more work like that. I try to put kinds of work that occupy the particular spaces that feel more like personal stories in the foreground. Because my work is so visually metaphorical, if I want to tell a particular story, I can do it in a way where I’m using particular visual elements to communicate an idea.

Color is a more superficial thing. It’s colorful because I love color. But in terms of subject matter and content, especially in the last few years, I started to incorporate my queer identity, my queer self. I’ve always included characters that were ethnically diverse. Where I was raised, it was incredibly multicultural, so it felt natural.

How do you feel about incorporating parts of your identity in your work?

I think a lot of it has happened in the last few years as a response to the rallies and the protests, the social and racial justice movements. When I first started to work steadily, I had some pieces in my portfolio that were lifestyle scenes of gay men specifically, partying, lining up to go into the club. I had just come out as well. I came out in my mid-20s. I was basically drawing reflections of my own life, because I was going out a lot and having fun as a young gay person. I was told by one of my agents at the time not to include those images in my portfolio because they were afraid it would offend clients and would not get me as much work. That felt a bit shitty, like I was being put back into the closet. It made me question what I should or shouldn’t include in my portfolio.

More recently, because I’ve gotten older and I’ve changed as a person, I started caring more about what is happening in these social and racial justice movements. It felt natural to bring it into my work and it happened incrementally. I didn’t used to see my work as having any sort of activist element. I only saw it as being pretty pictures.

How have you become involved in racial and social justice movements?

Because I come from a working class family, because of the way that I was raised, my parents taught me to look after each other—immediate family, close cousins. What was happening outside of our home was none of our business. Right now you hear these buzzwords— “visibility”, “take up space”, “be seen”—but back then, you wanted to be invisible because invisibility meant protection. You didn’t want to stand out. When we came to Canada, we had nothing. All the money we made, we made in order to take care of each other. To help someone else... it didn’t make sense for my family to believe that.

Fortunately I was able to lift out of our socioeconomic space and that’s when things started to change. I have a former student that spoke to my class recently, Radhia Rahman, she also comes from a working class family, born and raised in Queens. She said something really eloquent and truthful. She said “Without financial competence, you can’t have creative confidence.” Once I felt more economically and financially secure, that was when I opened my eyes. I have stuff to give. I can do this and I want to do this. I began to engage, mostly through social media at first because as a Canadian and non-citizen, I really didn’t trust the government. I was afraid that if I was arrested, I could be sent back to Canada. It’s a tricky situation to be in.

I was the person who handed out water. I was on the sidelines, but I didn’t do the deep march. I was really afraid. The way I activated was really slowly and cautiously. Then people started calling me to create images for some of their events, like Hate is a Virus, a nonprofit working to dismantle anti-Asian violence. I wish I could explain it in a more linear way, but so much of what’s happening now in my work is entangled with the way in which I was raised.

Tell us about the piece that is on the Pride Wall.

This actually started as a commercial project to pitch to a client. I didn’t get it, they chose to go with someone else. It started as a vertical piece and I decided to expand it into something bigger and it kept on growing and growing. I wanted to create a world that was bright and celebratory, celebrating parts of myself that I’ve always been ashamed of—my queer self, my queer identity.

I started to tap into things that I loved. I love skipping (Americans would call it jumping rope), so there are a bunch of people skipping. Roller skating has been big during the pandemic. I can’t roller skate, I tried. I pulled in some symbols from things that I like, for example The Last Unicorn, the movie, there is a scene where a bunch of unicorns all come out of the sea. What you’re seeing is a celebration of life through vignettes that have been placed together to create a world that is fun and bright.

Check out Marcos’s Pride installation in our Williamsburg, Brooklyn store! 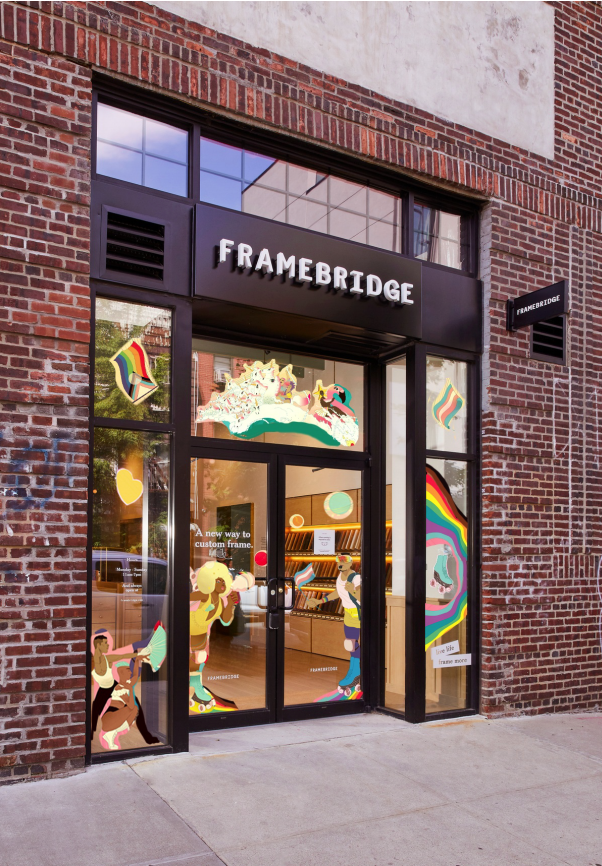