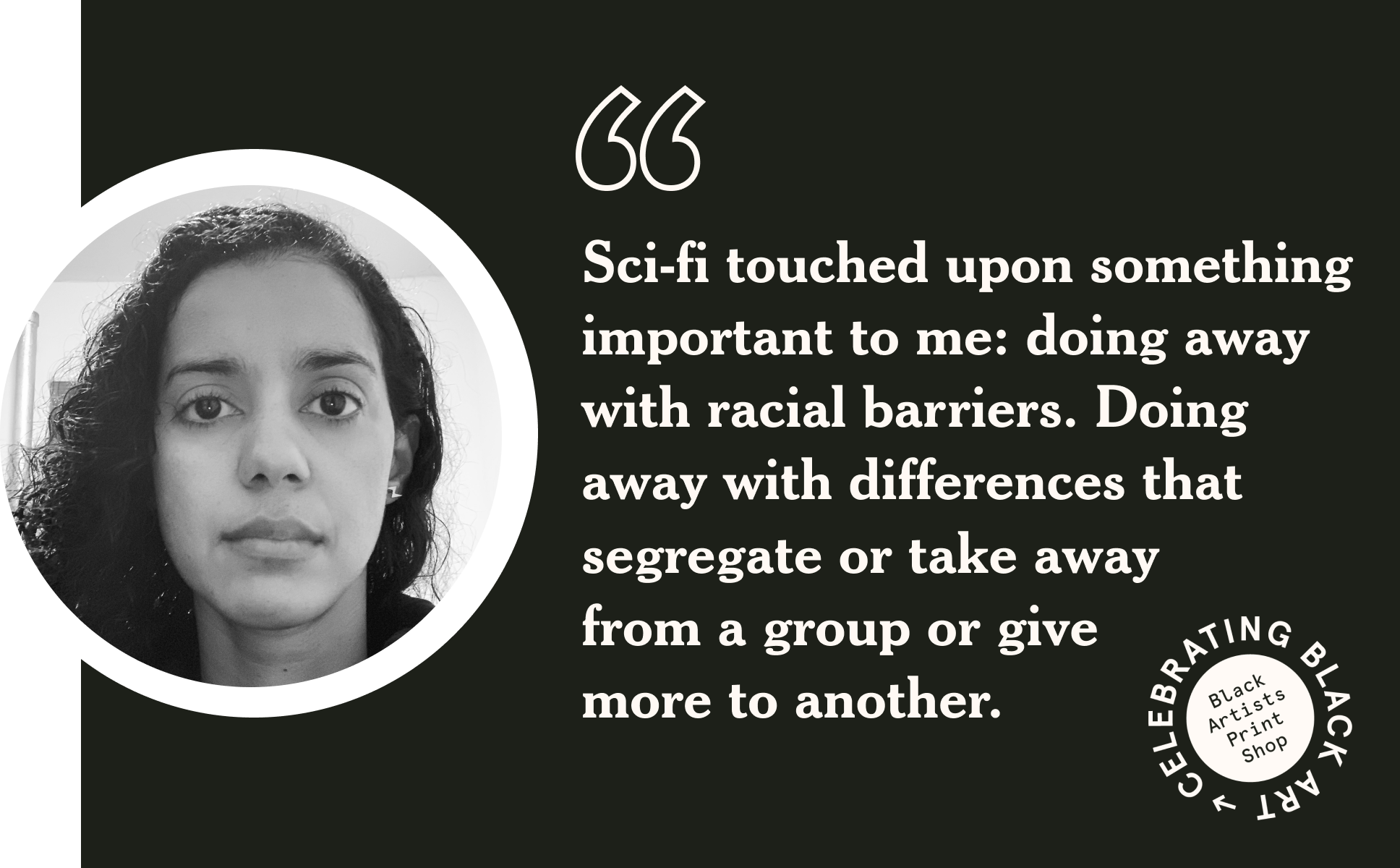 About the Black Artists Print Shop: The Black Artists Print Shop is part of our ongoing work to help advance racial equity within our communities. We aim to create spaces for Black artists—places where you can find their work, hear their stories, and support their businesses. Our fourth collection’s theme is celebrating Black art. To do so, we’re elevating ten distinct voices by highlighting the artists’ answers to the question: “What does celebrating Black art mean to you?” Their answers represent a breadth of opinions on what Black art is, how we can support it, and the importance of representation.

About Alta Berri: Alta Berri was born in New York City in 1979 and primarily works in oil paint. Her influences include George Bellows, Studio Ghibli and Hideo Kojima. She obtained an MA from the New School, a BS from NYU and is a YoungArts Alumni. Her work has been exhibited at Miami Art Basel and TheOtherArtFair. She lives and works in New York City, and is featured in partnership with Saatchi Art.

I think my transition from traditional themes in art, my earlier work was more reportage, then transitioning to sci-fi. It’s almost like I went full circle. I started as a kid, playing video games and my brother collected comics and we always watched these cartoons.

And then when I went to art school, they always keep you in this very traditional path. It’s great—they teach you the fundamentals, and because they teach you the fundamentals, you can choose themes that tend to provide commentary versus making pop art, not that pop art doesn’t make social commentary. Most of my art was reportage. I would observe things. I would use photography as reference imagery. I would use sketches as reference images. It would be a story. A story of life. Whether it was urban life or life where my mother’s from, a combination of the two. The dichotomy of first-generation born—and then that was the theme that I dealt with for a long time and it didn’t get much traction.

And it probably was because 20 years ago, there wasn’t this push towards inclusivity, or diversity. It was very much if your name was weird your resume was actually not plucked to the top, it was left at the bottom of the pile. As far as the private sector and the traditional art world, it truly was a white boys club. White cube. White gallery. White walls. White boys club.

When I graduated from NYU’s studio art program, I was the only person of color. So when I graduated, the curators that the head of the department brought in were very specific. Mine was this dude that came from Minneapolis, and one of the first shows that I booked after graduation was “Women Create.” So not only was I pigeon-holed into women artists, I was pigeon-holed into Hispanic women artists. So from the get you didn’t get these opportunities that your white, male counterparts received. From the get, they were in downtown galleries, Chelsea galleries.

To be honest, that’s why I am always a little hesitant to participate in programs like these, like a special month to dedicate to a specific disenfranchised group, they give me a call. I don’t want that. That’s another way of segregating the art world. If we’re really about inclusion, I should not be relegated to a month where we’re showcasing artists of color.

You draw, you’re a designer, you make video games, how do you identify as an artist?

Like I said before, in art school, they put you in the traditional tract. Which is great, because to be a good animator, you have to know the fundamentals of drawing. The fundamentals of anatomy. You have to really know your stuff. It’s much more than how to use a program. I’m very grateful to have a traditional art background that I can lay over my interest of animation—which is so grounded in traditional art, classically trained artists that know anatomy and know art. If you look at the latest from Disney, that Encanto movie, they’re saying the animation is crazy, it looks like real people moving. It’s because they actually know the fundamentals of anatomy and drawing.

How I identify as an artist is a classically trained artist whose interests have shifted, but they haven’t shifted, they have just come full circle. Because I started as a little kid who always loved video games and comics and animation.

And then I really came back around to the genre of sci-fi because of my feelings of inclusivity.

Can you say a little more about that? Sci-fi and inclusivity?

In sci-fi, and the world of sci-fi, society is not broken down by gender. Because we’re in space, and there are creatures. What you see in a sci-fi movie is not Black, white, Asian—you see all kinds of species, maybe battling because of difference but it’s not like current society.

It’s very inclusive in that it allows for Black artists and Black actors—because it is not like a period piece. If it’s in the 1800’s, everyone is white. If you’re brown or Black you’re a slave or cleaning the kitchen.

Sci-fi touched upon something important to me: doing away with racial barriers. Doing away with differences that segregate or take away from a group or give more to another. In sci-fi, it’s all about survival of the species! Survival of humanity! Or some dystopian adventure. It’s so beyond the banalities of our social strata.

That’s why I work on Mochila, the main character in most of my work, it’s a journey. A mission. An intergalactic character trying to find pieces to this puzzle to prevent what happened to his planet from happening to others.

Is Mochila the weary traveler featured in both your pieces “Eos Teleporter” and “Abandon Hull”?

This concept lends itself to a comic. It lends itself to a game. It lends itself to an animation. The reason I started with traditional oil painting was because it allowed me to have the still image to think about. It also lends itself to the lonely quality of the storyline. So I have these scenes, these landscapes. Sometimes it just landscapes, futuristic, other-worldly landscapes without any other characters. Or the characters are small or dispersed within the composition. Secondary to the landscape, the landscape is the main character. And I think I did it that way to slowly develop the world. The concept is in my head, but I want to develop it in this order—the world, the characters, the plot. And you can do that with still imagery. Because if I did a comic first, I would have to have that whole storyline down. It’s a way to introduce an audience to the characters and the world first, then if I do want to build it out, it can become a graphic novel or an animation or a game, then I can work out the story and the plot. And Mochila’s mission.

These works are so well received. Why do you think that is?

Because the emptiness and the other worldly qualities allow the audience to get lost—even if they don’t know the story of Mochila—they can get lost in this world. I’ve enjoyed the feedback. To switch to a new concept like this, you don’t know if people are just going to want to see your old work. It filled a void that I need as an artist. To transition from this identity I took on as a reportage artist in my twenties that I have since shed. That identity did not serve me well.

How do you hope somebody feels when they see your work in a frame?

At an art fair, there was this one gentleman who stood in front of my painting. He stood there for like ten minutes. So I asked him, “Sir, what are your thoughts?” And he said, “I like blue.”

The painting had a lot of blue, because it was an underwater scene. And you could see where the water breaks. You could see both on the surface and below the surface.

He just stood there, because his favorite color was that hue of blue. And he stood there captivated for ten minutes. And I had goosebumps. It was a great feeling, for something that I made to have such an impression. Even if he was just moved by that particular shade of blue. People’s attention is limited. I don’t think he understood the concept, or Mochila, or the sci-fi thing. He just liked the way I composed that water scene.

People react the way they are going to react, no matter your intention.

Learn more about Alta, a Saatchi Art artist, on her website.