Please Note: Orders are currently delayed by 8 weeks as we work to keep our team safe.

The Top Searched Rom Coms in Every State 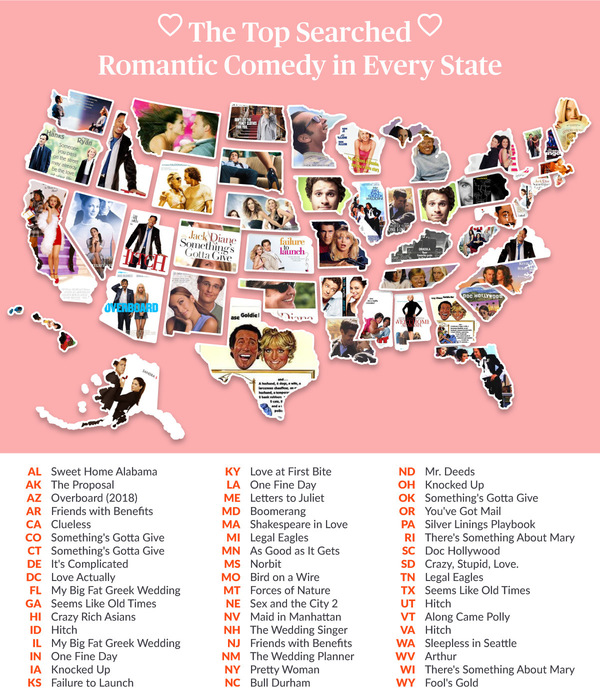 Each state clearly has their rom-com favorite, with the majority of movies claiming one state each. Two states without surprising results? Alabama and Washington showed a lot of state pride with the most popular movies being Sweet Home Alabama and Sleepless in Seattle respectively. 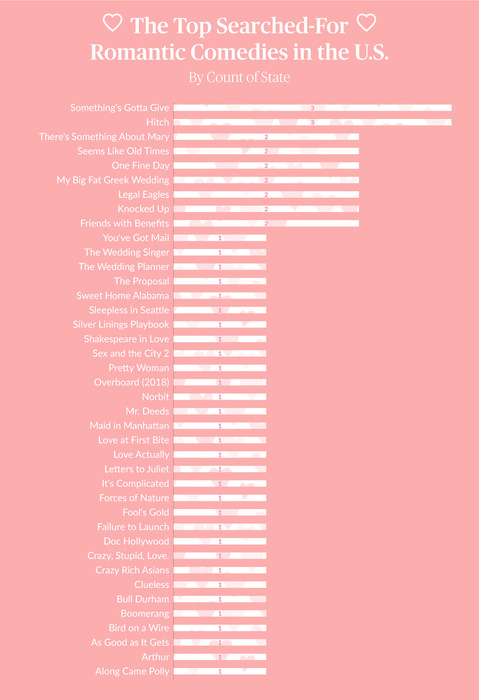 Coming in as the top searched for romantic comedies in the US were Somethings Gotta Give and Hitch. 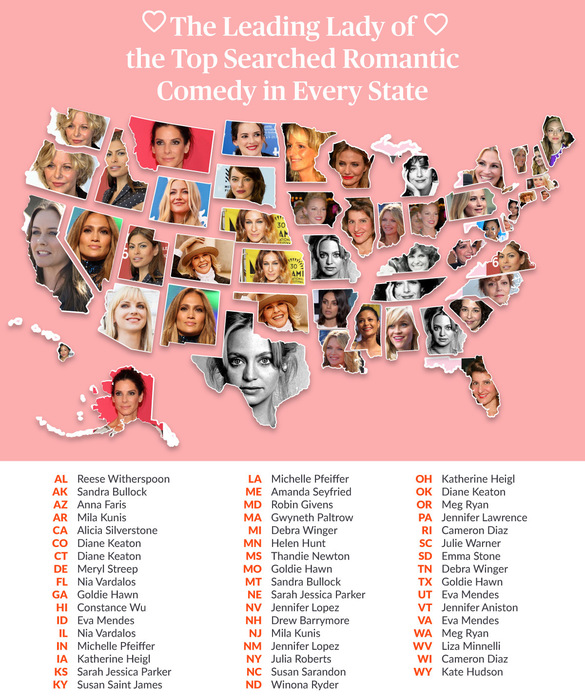 After finding out the top rom-coms in the country, we wondered what leading lady stole the hearts of each state. In the Northwest, Meg Ryan took the cake as the lead actress in the movie You’ve Got Mail and Sarah Jessica Parker took the middle of the country, starring in the most popular movies in two states, Sex and the City 2 and Failure to Launch. 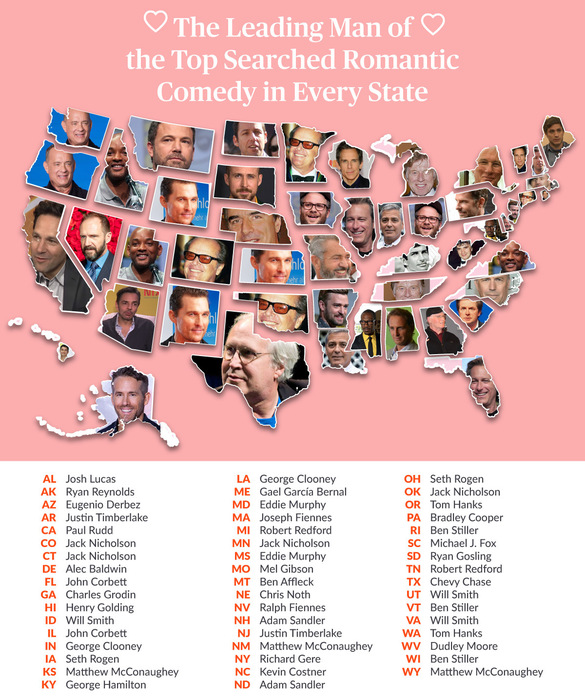 We, of course, also had to look at which actor was the biggest heartthrob in each state. Chevy Chase stole the hearts of people in Texas and Georgia for his role in Seems Like Old Times alongside Goldie Hawn. Matthew McConaughey proved to be the biggest heartthrob in three states for his roles in three different movies: Failure to Launch in Kansas, The Wedding Planner in New Mexico, and Fool’s Gold in Wyoming. 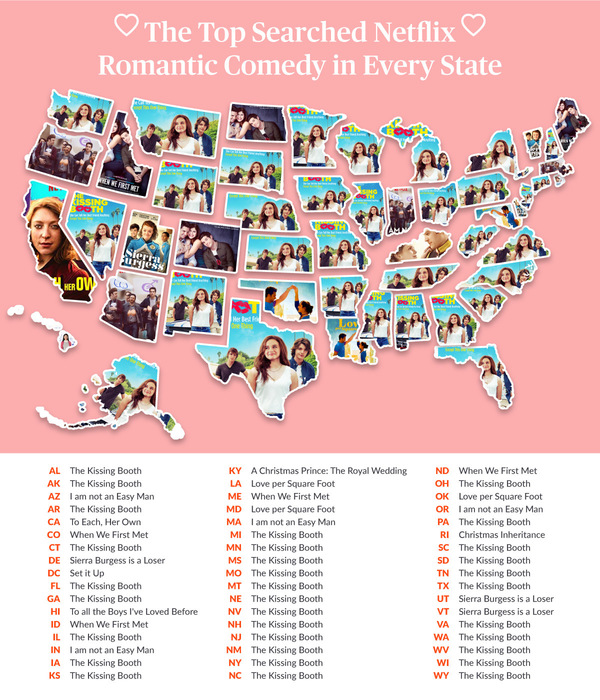 With more people streaming content than ever before, it made sense to look at which Netflix original movie is the most searched in each state. Even if you’re an avid Netflix watcher, some of the states’ most popular original romantic comedies may be new to you. Now you just have more titles to stream!

As you can see from the map, The Kissing Booth was the clear winner across the country, taking the most searched spot in 32 different states. Outside of The Kissing Booth, Rhode Island and Kentucky are both big fans of Christmas-themed rom-coms with their favorites being Christmas Inheritance and A Christmas Prince: The Royal Wedding respectively. 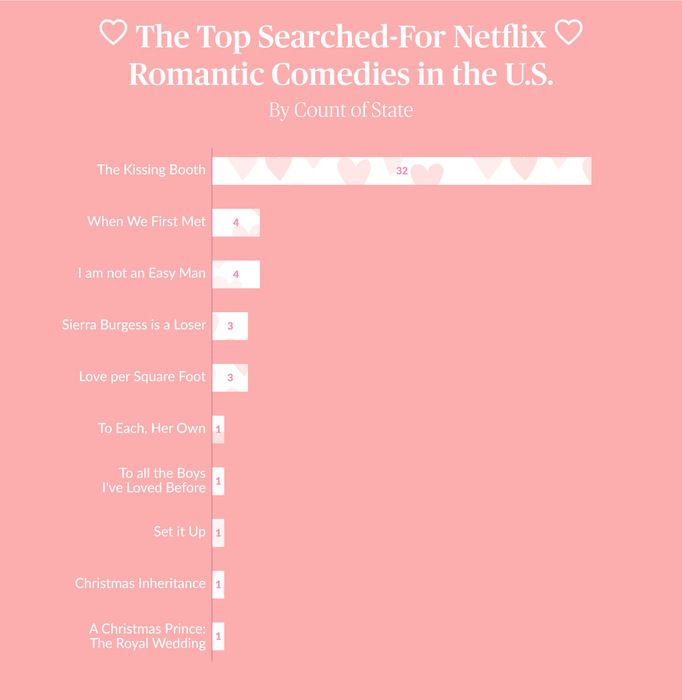 Overall, the most popular Netflix original romantic comedy last year was The Kissing Booth, being the top searched in 32 states nationwide. If you’re one of the millions who watched the movie last year, this may come as no surprise. With its cheesy, naive, feel-good plot, the movie is the  perfect, cookie-cutter example of a corny rom-com. Other top Netflix originals included When We First Met, I Am Not an Easy Man, and Sierra Burgess is a Loser.

People across the United States all have different preferences for their romantic comedy movie fix, but the genre’s popularity and ability to make people feel good is a constant. The next time you’re looking for a pick-me-up, we hope that you are able to find the perfect rom-com to cuddle up on the couch to with your significant other, best gal friends, best guy friends (we all know you watch rom-coms), or even your mom. Bring on the cheesy (sometimes cringy…) good feelings!

2019 Design Trends, According to Us
For the People, By the People